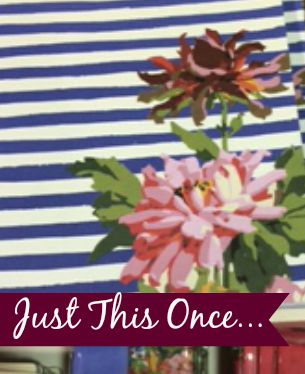 Looking at it this way has really helped me. It's not a forever decision. 'Just this once' doesn't commit me to a new pattern for life, so I have no reason to feel overwhelmed. Yet when I continue to make that choice several times in a row, it's not long before I'm on a path to a new habit. Personally, I've been able to make some significant changes, over time, without feeling defeated before I begin.

To say no to coffee or chocolate bars forever -- no, I can't do it, believe me I've tried -- but I have found I am more willing and well able to say no 'just this once'.


I'll never forget an incident that happened to a colleague years ago. She went into the school to pick up her young son, and decided since she was going to be gone for just a minute, she'd leave her purse in the car. When she came back, the car was broken into, and yes, the purse was gone! Talk about the rigmarole of trying to cancel credit cards and get new ID, she worked on it for weeks.

I decided at that time never to leave my car unlocked or my purse in the front seat. So often over the years I've been tempted, but I'm always reminded...don't do it, because you never know when 'just this once' will cost you.

Don't talk on your cellphone just this once either. I heard yesterday that a friend of a friend got hit turning onto a highway, and apparently she was on her cellphone at the time. I don't know if she talked regularly, or just this once, but either way it's cost her and her family of four. Now the car is totaled and she's in the hospital with serious injuries.

Habits, good or bad, happen one choice at a time. I want to make choices that bring me closer to experiencing my life more beautifully, with less hassles, and good health. So, Beautiful Readers, do you develop positive habits... or deal with the consequences of bad ones?
On that note, just this once, today I'm going to exercise and go for a 30 minute walk around my neighbourhood.

Making new habits one choice at a time,
Brenda