A Parade of Pansies 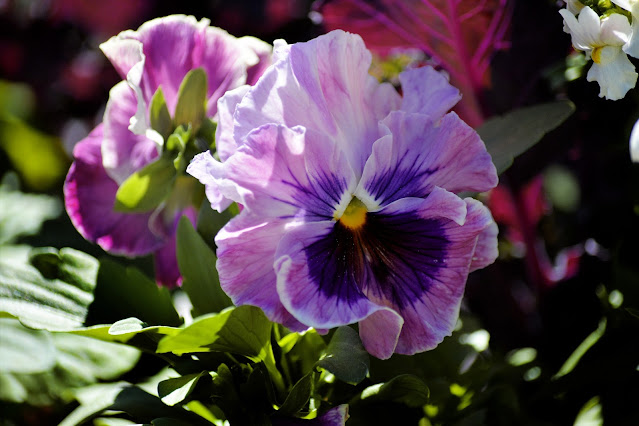 " The little purple pansy
brings thoughts of the sweetest things. "
MARY E. BRADLEY
If you're looking for a little heart's ease on a cool spring day, there is nothing like the cheerful pansy to do the work. Pansies are one of my favourite sightings at the garden centre right now. Trays and trays all laid out in colourful waves—from the lightest lavender to icy blue and plum violet, from orange and yellow to rose and maroon, all the way to the velvety deep purple and black ones (black not being a favourite, but still they have their own elegance).
I don't remember when my love affair with pansies began—it's been decades—and I don't recall exactly what it is about pansies that first captivated my imagination as a girl. Perhaps it was their cheery faces or their ruffled petals; perhaps it was their utterly sublime colours; or maybe it was the soft yet unforgettable fragrance that requires one to bend near to catch a whiff.
Word got out and over the years I became the happy recipient of all manner of pansy-themed cards and other objects and whimsical items from family and friends. I found myself drawing them in notebooks and dipping brushes into watercolours. And when I learned that a dear pen friend was an especial painter of pansies, I commissioned her to paint a bouquet for me. It is many years old now, but it's still a favourite acquisition. I would take a picture to show you, but it decorates the wall in my Mom's home so no photos of it today. Although I eventually stopped collecting all things pans-ied, my eyes still gravitate to this little flower with its divine pop of colour. I have never stopped loving it. 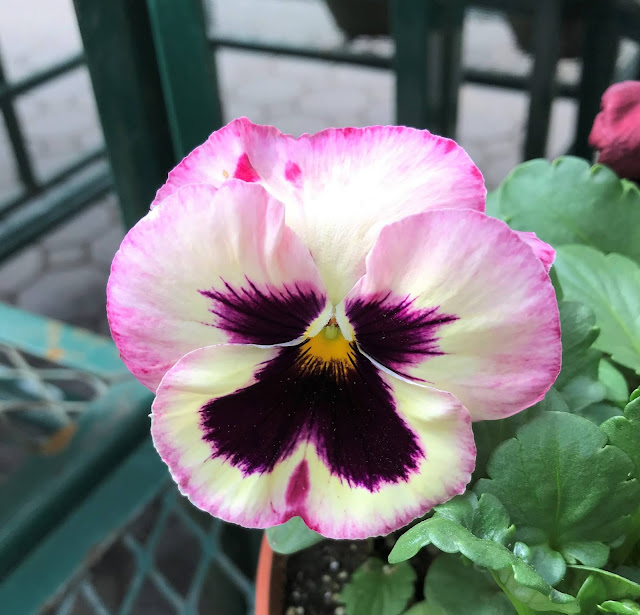 "... and there is pansies, that's for thoughts."
WILLIAM SHAKESPEARE
According to my research, the name pansy is derived from the French word pensée, which means 'thought'. Somewhere in the mid-15th century, it was imported into Late Middle English as a name of Viola. The flower came to be a symbol of remembrance. Pansies derived from violas, and as someone put it, technically all pansies are violas but not all violas are pansies. Somewhere in history, it was thought that the wild pansy, also known as Johnny Jump Up, had some medicinal properties and thus came the term 'heart's ease'. For me, the heart's ease is more for the soul than a physical remedy. Who among us hasn't found comfort and pleasure in their bright faces - I dare you to try and not smile when you look at them, either here or in your garden, should you be so lucky to have them growing there already.
And so, a little parade of pansies for us today: the top and bottom pictures are from Pixabay, the ones in between are mine, all taken at a local garden centre. Hope you enjoy. 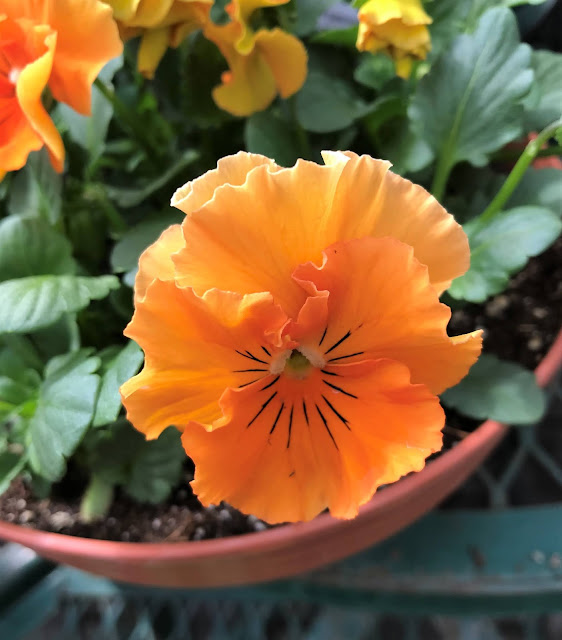 " The best way to know God
is to love many things. "
VINCENT VAN GOGH 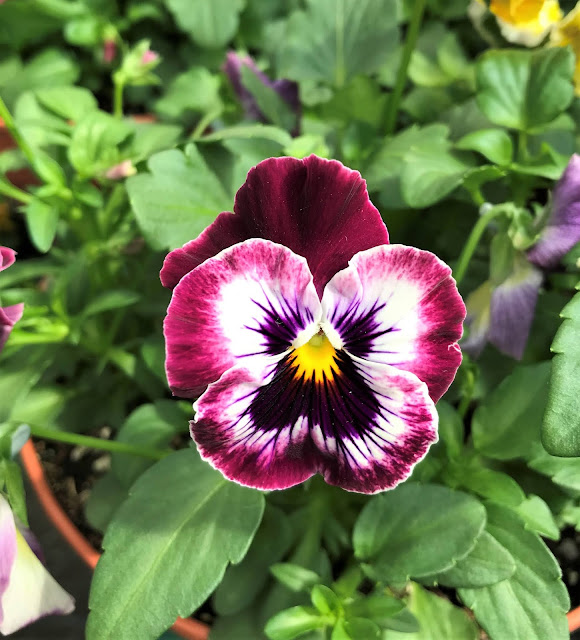 Pansy so velvety, pansy so wide,
Pansy with heart of gold,
How I wish I could stay outside
Till I saw your petals unfold!
UNKNOWN 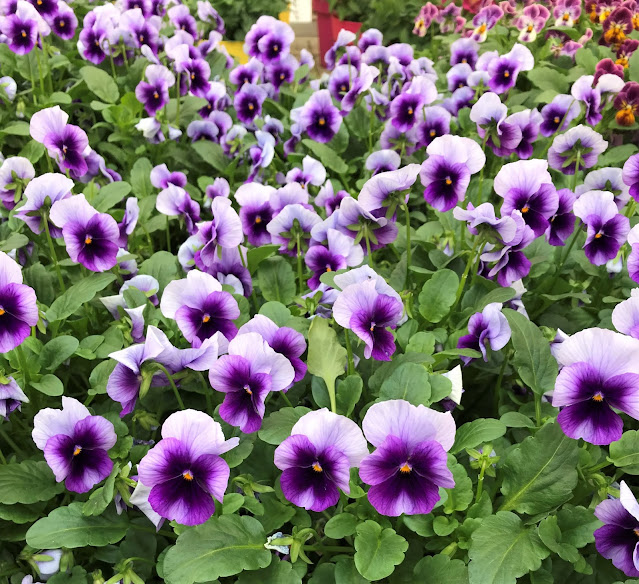 " Heart's ease of pansy, pleasure or thought,
Which would the picture give us of these?
Surely the heart that conceived it sought Heart's ease. "
ALGERNON CHARLES SWINBURNE 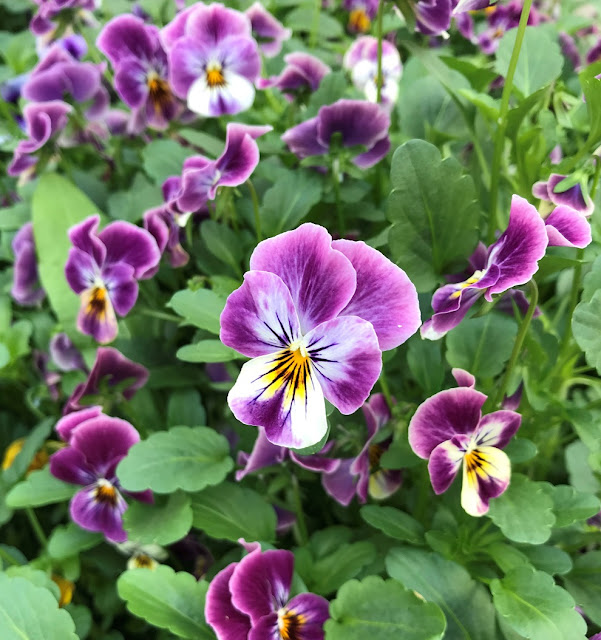 " In a gentle way you can
shake the world. "
GHANDI 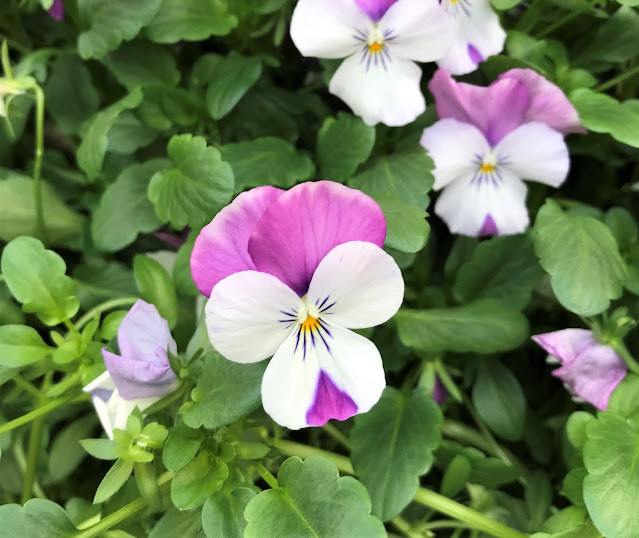 "A smile is a light in the window
of a face that signifies the heart
is at home and waiting. "
ANONYMOUS 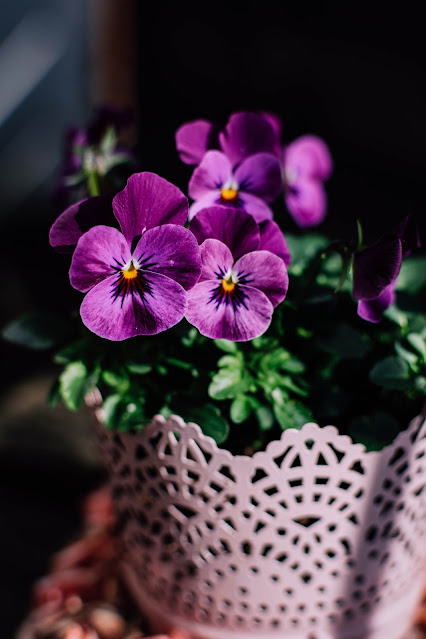 " Nobody can keep on being angry if she looks
into the heart of a pansy for a little while. "

* * *
Do you have a favourite today?
* * *
I hope your weekend is unfolding pleasantly.
Sending wishes for days graced with beauty and heart's ease.
Hugs,
Brenda
xox
Photo Credits:
(Top) Deb Nyman from Pixabay
(Middle Pics 2 - 7) Brenda C Leyland
(Bottom) ValeriaLu from Pixabay
♥ By Brenda @ Its A Beautiful Life at April 24, 2021