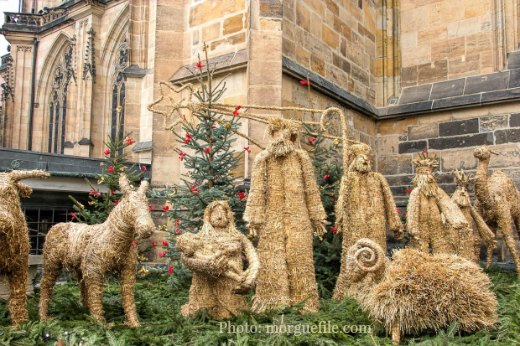 Today I am so pleased to welcome my brother, David, as my Guest Blogger. He shares with us a piece he wrote entitled Jesus Evicted: A Short Advent Story.

While they were there, the time came for the baby to be born, and she gave birth to her firstborn, a son. She wrapped him in cloths and placed him in a manger, because there was no room for them in the inn. (Luke 2:6-7)

It was the usual row which came up year after year on town council for the past 10 years straight: Could the crèche be located on the lawn of City Hall or not?

Lines were drawn, as usual, between the “pro” and “con” crowds. Prominent on one side was cranky old Bartholomew (“Bart”) Collins, a part-time Social Studies substitute teacher for Bethel High, who faithfully reminded everyone on council of the principled need to keep “church and state” separated. His position was clear:  City Hall is no place for Baby Jesus! On the other side was Miriam Dominique (or as more commonly known, Sister Mary), well known as the town’s longest-employed and most beloved kindergarten teacher at St. Peter’s Elementary. Not surprisingly, Sister Mary argued consistently and vociferously to “keep Christ in Christmas”!

Every year for the past decade,  Sister Mary’s sensible voice had prevailed, and every year for the past decade, Baby Jesus lay quietly, but prominently, on City Hall lawn. But every year the vote edged closer and closer toward a “secular upset.” Two years ago, the usual 8 to 1 vote had been 6 to 3, and last year, Jesus had only narrowly avoided being ousted with a 5 to 4 vote.

Given this history, the city’s council chamber this year was buzzing with both nervous and gleeful energy. Whether one was nervous or gleeful, depended on which side of the hall one sat: Sister Mary’s “Bible thumpers” occupied stage left and nervously fidgeted and frowned across the aisle toward Bart’s fellow “commies” clustered in strategic spots on the right. But tonight, the Bart-contingent was poised for a well deserved victory. Victory indeed! For rumour had it that Bart had successfully swayed the new-comer and youngest member of council , one Lisbeth Johnson, to the cause. But only time–and a fateful vote–would tell.

“I now moo-ve to the last item of bizness,” the Chair drawled. “We have here a motion on the floor from thuh last meetin’ which reads, “Moved by Councillor Dominique that a Nativity scene be located on the East Lawn of City Hall for the full month of December to commemorate the Christmas holiday.”

As was the custom, various members of council rose, one by one, to speak for or against the motion. The speeches were short and to the point, and civic respect marked both sides of the debate. By now, virtually everyone in the room knew Bart and Mary’s speeches–neither had bothered to change a word in their argument from year to year. Consequently, few really listened to their arguments while they spoke, including the town reporter who momentarily suspended her scribbling to sip her Starbucks and send an SMS message.

Beyond Bart and Mary, everybody else’s position also became clear: three Councillors each supported Bart and Mary, leaving only one more to speak–the newcomer. Now, the commonplace gave way to suspense, as if there were an invisible scoreboard showing a 4 to 4 tied hockey game! Onlookers sat on the edge of their seats, waiting for sudden death overtime to decide the game!
And then, Lisbeth rose to her feet to speak.

Mary looked down with despondency. Word on the street was that the newcomer would come in like an clumsy ox and upset the manger. Sister Mary prayed silently that the onslaught of evil forces pervading the room would be vanquished by the heavenly host, while Bart’s countenance shone brighter than the star in the East as he already sensed victory!

“Most of you are still getting to know me,” young Lisbeth began. “So let me tell you just a bit about myself before I argue for or against this motion.”

“I was raised in a little town, not too far from here, where every Sunday I attended a little white church with my parents. There I heard weekly the stories of the Bible. Of course, you won’t be surprised that I heard the story about Jesus, Mary and Joseph, the angels, the shepherds and the wisemen over and over again. And to be honest, I loved that story and I still love it today. In fact, the Christmas story really gives me a warm feeling inside whenever I hear it. And whenever I see a Nativity scene, I get that same feeling all over again.”

Sister Mary raised her head, pondering these words. Perhaps all was not lost. Perhaps Lisbeth would rise up and support the Christ Child!

Bart, on the hand, nervously nudged his pen back and forth on the desk. Was Lisbeth going to cave in to emotion and nostalgia over against clear-headed rationality and civic principles? Would she give in to the self-righteous duress imposed by those–those–fundamentalists?

Lisbeth continued. “But today, the decision to put a crèche on the lawn of City Hall cannot be decided by memories of days gone past or of personal nostalgia, even my own. Rather, we must decide on the basis of what really is for the good of all us citizens, whether Christian or not. And those of you here today who claim to be Christians, I don’t think I need to remind you that Christmas story itself says something about having ‘peace on earth and good will amongst all the people’.”

Lisbeth paused. Those in attendance held their breath. The clock ticked more slowly than it ought to have.

“But today, let it be known here and now that I will vote against my own warm feelings, and therefore, I will vote against the motion to allow the crèche on City Hall Lawn. Not everyone in this town is a Christian and since City Hall is a public space, I declare my conviction that the Nativity does not belong there.” And with this, Lisbeth  sat confidently down.

The room was, momentarily, silent, only to erupt a full 3.5 seconds later with a grand cheer from the right when Lisbeth’s intended vote sank in! Bart and company had finally won! Council had finally seen the light. Time to send Jesus packing!

On the left, Mary’s supporters were sullen. A few even sobbed quietly. Moments later, when the chair called for the vote, the crèche, for the first time in a decade, was prohibited from occupying public space. 5 to 4 against the motion. The motion was defeated!

The next morning, a busy businessman,  having finished his morning newspaper, latte and cigarette, stuffed paper, cup and butt into the garbage can on the corner.

Emerging from the alley, a frail,  straggly-haired, old man, reeking of urine, shuffled toward the receptacle, grabbed the paper, snatched the cup and rescued the smoldering cigarette.  Pausing momentarily, he scanned the paper’s front headline: “Baby Jesus Evicted!“

“I know the feelin’,” he muttered as he stuffed the newspaper into his jacket, if only to battle the bitter cold yet one more day.