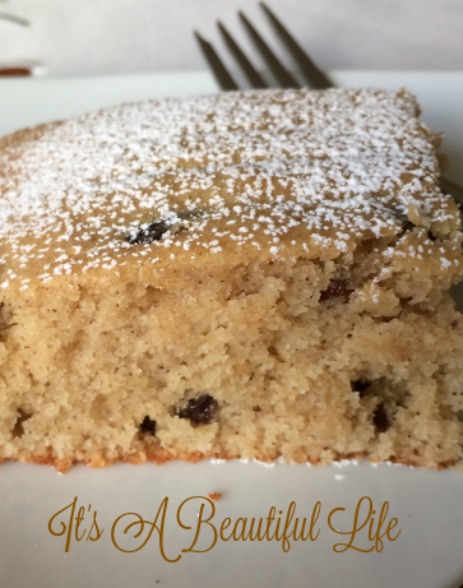 It's a chilly afternoon and the air has a decided nip to it. Which means it's a great day to bake something warm and comforting like Raisin Spice Cake.

When we think of this simple cake, we immediately think of an old family recipe. My sister now has the handwritten copy from our grandmother’s cookbook, who originally got it from her sister-in-law, Julia. My mom also had the recipe and made it often when we were kids. It came to be known as Aunty Julie’s Cake. If you look closely at the recipe, you'll see Grandma's side note: "It's good." And we all agree, yes, it is good. 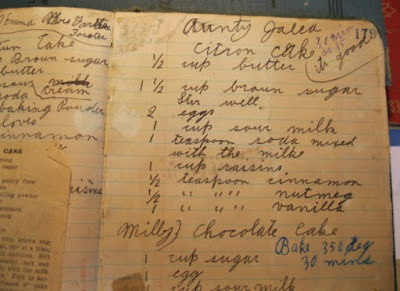 Now there's a bit of a funny story that goes with this particular recipe. One day when Sis and I were youngsters we decided to surprise our mom with some baking. I might have been about ten or eleven, my sister three years younger. After deciding what to make, we went in search of Mom's recipe, which had been copied down, minus the most needful ingredient, the flour.

The two of us, being new bakers, didn't know that flour is always a key ingredient in any baking venture. Maybe we were denser than some kids, but we took all recipes at face value. We creamed the butter and sugar, we added the milk, spices, and raisins.

It doesn't look the way a batter should look, we mused, peering into the bowl with anxious eyes. We went over the ingredient list again, and yes, we had added everything it said, so, alright then, into the oven it went. Fingers crossed, we hoped for a 'miracle' in there.

Thirty minutes later the pan, now out of the oven, indeed looked strange. There was this hard sugary mess sprinkled with plump burned raisins. We called Grandma -- she would know what went wrong. She asked me to read off the ingredients. "But, you didn't add any flour." We wailed, "But the recipe didn't say."

That's the day we found out that every cake needs flour, whether the recipe says so or not. That incident is now a part of our family folklore and we've had many a good laugh over it. Sister thinks we fed the burned mess to the chickens, and Grandma no doubt enjoyed a good chuckle when she got off the phone that day.

Here is the recipe below, flour amount assuredly included.

Cream butter and brown sugar. Add eggs and vanilla. Mix well.
In separate bowl, stir together flour, baking soda, baking powder, and spices.
Alternate additions of flour and buttermilk to creamed butter until all is incorporated.
Gently fold in raisins.

Pour into greased and floured 9" x 9" cake pan.
Bake 350F for about 30 minutes.
Cool for 5-7 minutes. Then turn out of pan onto rack to finish cooling.

We sometimes eat it with ice cream and lemon sauce,
or we frost it with either a cream cheese or butter icing.

“This is my invariable advice to people:
Learn how to cook -- try new recipes, learn from your mistakes,
be fearless, and above all have fun!”
~ Julia Child, My Life in France

“...no one is born a great cook, one learns by doing.”
~ Julia Child, My Life in France

On that note, I'm wishing you a blissful day...