A Swish Of A Tale And Four Marmalades

" A kitten is, in the animal world,
what a rosebud is in the garden. "
ROBERT SOWTHEY
First, there was Orange Kitten back in 2009. She was our neighbour's kitty three doors down. We eventually learned her real name was Squirt, but she was always Orange Kitten to us. Orange Kitten loved to visit; she'd climb our trees, snooze on our deck chairs, and play in the flowers. She was so sweet and cute that we loved her instantly. Eventually she and her family moved away, but I have never forgotten her. I still love to see her playing in the liatris on the video below. 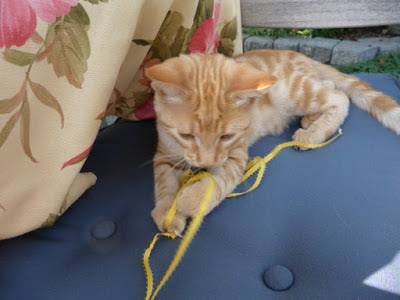 Then, some years later, we met another orange cat, a marmalade, as they are sometimes known. It was a couple of summers before we finally learned where she lived and that her name was Ziggy. She tended to visit only in the summertime and used to come into the garden where she'd look for Rick, who was most often working in the yard.
" Cats leave paw prints in your heart,
forever and always. "
UNKNOWN
Ziggy is gentle and has the softest meow. She'll tap you on the arm when she wants to be petted. She is also highly entertained by the family of mice we know live under the neighbour's garden shed behind us. All that fallen bird seed, of course; they must think they live in paradise with all that free food. So with tail a-swishing, there's a chase under the shrubs and around through the plants. Miss Ziggy is one well fed cat so we don't think she bothers to actually catch them—thankfully, we've never seen telltale signs—but of course, there's the fun of the chase.
It all adds to our own amusement as we relax on the deck. She did give the resident squirrel a fright one year. We always tell him he's a silly lad to let his tail hang below the feeder, because in fact, one day, I think it was Ziggy who did a flying leap to try and catch that tail. Fortunately for Mr. Squirrel, he was fleet of foot and escaped by a hair. And now, Ziggy is too portly to do such acrobatics and flying leaps into the air. Still, we warn Mr. S to keep a tight rein on his tail if he knows what's good for him.
"Only one thing lack these banks of green —
The Pussy Cat who is their Queen."
SIR WINSTON CHURCHILL
Then we took a trip to England in 2016 and that's where we met Jock VI when we visited Chartwell, the home of Sir Winston Churchill and his family. There's a whole story about Jock. For Sir Winston's 88th birthday in 1962, Sir John Colville gave him a ginger cat with a white chest and paws. Named Jock, the cat became a favourite, often found on Churchill's knee. Churchill even took Jock to his London home at Hyde Park Gate when he traveled there from Chartwell.
When the National Trust opened Chartwell to the public in 1966, Churchill's family requested that there always be in comfortable residence a marmalade cat named Jock, with a white bib and white socks—in honour of the first Jock, who outlived his master by nine years.
And so the day came when we arrived at Churchill's old residence to find Jock VI wandering like a free spirit around the gardens. He looked a lovely cat, but stayed well away from the many visitors and their feet, who were also wandering the grounds that day.
We recently learned on Twitter that Jock VI had been growing blind and was finding life at Chartwell difficult. He recently retired from his official post as the marmalade cat in residence and now lives out his life comfortably elsewhere. Which meant the search was on for a new Jock.

" It is impossible to keep a straight face in the
presence of one or more kittens. "
CYNTHIA E. VARNADO
A six month old rescue kitten is now being trained to take old Jock's place. Previously known as Sunshine, he is now officially Jock VII. Isn't he a darling? It is said that "Jock is settling into his residency and has developed a mischievous character. His favourite pastimes are investigating what the gardeners are up to and trying to persuade people to give him snacks. He also likes lots of cuddles on the sofa after an eventful day." I want to go visit him!
* * *
And so, that is my swish of a 'tale' of four marmalade kitties
who have wandered in and around our lives. Hope you enjoyed.
On that note, I'm wishing you a purr-fectly splendid day. Keep safe.
Heart Hugs,
Brenda
xox
♥ By Brenda @ Its A Beautiful Life at August 12, 2020