Light Up Your World

"It is better to light one small candle
than to curse the darkness."
ELEANOR ROOSEVELT

With the shortest day of the year nearly upon us here in the northern hemisphere, the early darkness can certainly weigh heavy on people's spirits. Sometimes, even those of us who love the winter months and take pleasure in these short, grey days and early dusk can also feel the darkness pressing in.

On such days, many of us push against it by lighting up our homes and yards. I dig out the twinkle lights early in the fall, and as soon as it grows dim in the afternoons -- which gets earlier and earlier -- we switch on a lamp perched on the sofa table in our bay window. Suddenly it all feels cozy. I always hope it creates a moment of gladness in the hearts of anyone out walking their dog or driving past. I love it when I come home of an evening and find that Rick has turned it on for me. Adorable man -- he certainly adds light to my world.

There was a time years ago now, not being well in body or soul, when I found it hard to arrive home to a house shrouded in shadows. I really felt the darkness pressing in during that season, so I used to leave a lamp on, or set a timer to turn on just before I arrived home. I always found walking into an already lit house such a solace. I even uploaded a photo on my computer desk top -- an online pic I found of Jan Karon's writing studio aglow from a lamp on her desk. Of course, it didn't actually add light to my room, but it surely did so to my soul. 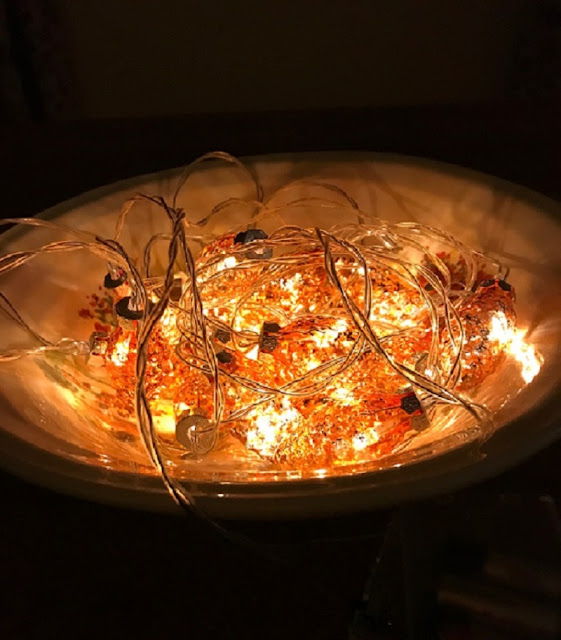 My string of golden pine cone lights, bought several years ago now, light up my world at this time of year. Sometimes they nestle in greenery atop a bookshelf or the mantelpiece. This year I set them in a ceramic dish that sits in the middle of the dining table. Every evening, I press the On button and create a bowl of gold. And, then there is my LED pillar candle in the kitchen which basically glows day and night now. I admit to getting a little thrill whenever I see it shimmer as I come down the stairs, especially when I wander in on a sleepless night. 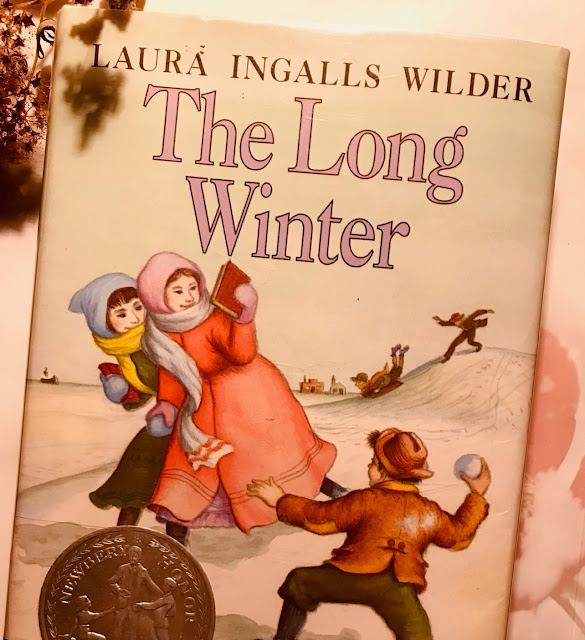 The last couple of days I've been reading The Long Winter by Laura Ingalls Wilder. Oh my, what a thrilling story she tells of her family surviving -- barely -- one bitterly cold winter with blizzard after intense blizzard following one on the other for months on end. What I found so amazing in this tale was how the little Ingalls family found the grace and grit, not to mention gratitude in the midst of their most trying times wrestling with the elements to keep from starving or freezing to death. I tried to imagine how it must have felt for them the day the kerosene for the lantern ran out and there wasn't a snowball's chance in you-know-where for a train with supplies to get through those prairie snowstorms until spring. So they lived by the light of the fire in the stove, and often went to bed when it grew dark to save the firewood or hay bundles they used as fuel for the next morning.

As I say, I came away from the story amazed ... first that it wasn't blizzarding in my world when I 'came to'. Haha. And second, because I became ever so grateful for my basically easy, cozier world where I can turn on the lights any time to chase away the shadow bears.

I'm pretty certain there are dozens of ways that people keep their own hearts burning with cheer on these dark nights. I'd love to hear what you do during this time of year to add light to your world.

"A smile is the light in your window that tells
others that there is a caring, sharing person inside."
DENIS WAITLEY


Wishing you a beautiful day and a wonderful weekend.