Reading on a Summer Afternoon


“Summer afternoon—summer afternoon;
to me those have always been the two most beautiful words in the English language.”
~ Henry James

There's nothing like the warmth of a summer afternoon and the drone of bees in the flower garden to bring back equally warm memories of the books I read as a girl during summer holidays—Anne of Green Gables, Little House on the Prairie, Nancy Drew, Rebecca of Sunnybrook Farm, Lassie, Pippi Longstocking, Five Little Peppers and How They Grew, and The Adventures of Tom Sawyer, to name but a few.

People tend to remember not only their childhood books but the places where they read them—on the front porch swing, in the attic, in the crook of a huge tree. I don't recall having a special place per se. 'Have new storybook, will read anywhere' was my motto—on my bed, laying on the living room couch, sitting on the back step with the dog nearby, stretched out on a blanket in the shade of the huge poplars. It never really mattered where, for once I cracked open the book, down the rabbit hole I'd disappear and everything else would fade into the background. I could be gone for hours with my eyes glued to the pages.

Recently, I found a copy of Tom Sawyer at our library book sale. I felt the draw of the old Golden Illustrated Classic cover, and so now here I sit in my garden, those bees buzzing in the thyme, with the book in my lap. Mark Twain, in his 1876 Preface, declared that his book was intended mainly for the entertainment of boys and girls. I can attest, this girl was duly entertained. He went on to say, "I hope it will not be shunned by men and women on that account, for part of my plan has been to try to pleasantly remind adults of what they once were themselves, and of how they felt and thought and talked, and what queer enterprises they sometimes engaged in."

How well Mr. Twain knows us. Opening the storybook to read long forgotten but strangely familiar lines, memories gushed like water from a hose on a warm day. Not only about the story itself, but about my own surroundings and who I was at that age when I first read it.

Tom Sawyer lived in a world vastly different from my own—in the Mississippi River town of St. Petersburg, Missouri. It sounded much more interesting, I thought, than growing up on a Canadian prairie farm where playmates were scarce, so I was highly intrigued by his lively escapades with his chums. I giggled at how Tom inveigled his friends to paint the "far-reaching continent of Aunt Polly's unwhitewashed fence". Clever lad. And, who could forget the delicious chill when Tom sneaked out of the house late one night to visit the grave yard with Huck Finn. I allowed myself to imagine sneaking out of our house in the dark of night with little sister in tow to the tree-lined graveyard in town where Grandpa was buried, and I just knew I couldn't do it. In daylight it was a pleasantly amiable spot, but in the dead of night, I was pretty certain I'd be as spooked as Tom and Huck had been. Happy was I to live that adventure vicariously through two braver-than-I fellows.

Reading those lines above, I found it hard to shift gears and come back into the present. I wanted to stay there and relive a few more adventures with Tom -- I could feel the girl I once was coming out of the shadows and enjoying her old memories for a few moments.

But, I do want to tell you about three other books I'm dipping into these warm summer afternoons. 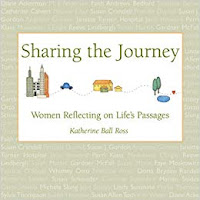 It's a collection of essays originally published in the Victoria magazine back in the day when Nancy Lindemeyer was editor. There's a lovely foreword by Nancy, and it features writers such as Diane Ackerman, Madeleine L'Engle, Susan Minot, Tovah Martin, Reeve Lindbergh (daughter of famous Anne Morrow Lindbergh), among others.

I wanted a copy of this book for years, but reason would win out, saying that since I still had the original magazines with these essays in them, I didn't really need the book. Yes, it's true, but you know what they say about such matters: The heart wants what the heart wants. So, when I found an Amazon birthday gift card in my hand in Spring, I splurged, and you know, it really is nice to sit down and find those favourite essays bound together in one volume. 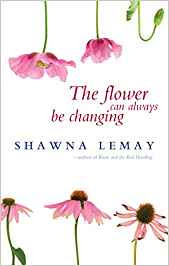 The flower can always be changing
by Shawna Lemay (2018)

This slim volume of tiny essays caught my eye recently while browsing for something nice at the local bookstore. It was the book cover and the title that stopped me in my tracks. Doesn't it look inviting to read on a summer afternoon?

I'm now in the middle of it and am enjoying very much the author's thoughts about life and beauty and flowers. She says, "I've come to understand the soul is a flower with which to bless the world." I think we might be kindred spirits. How lovely to learn that this new-to-me author lives in a city very near me, which means she's a local girl like me. She is also a blogger at Transactions with Beauty which you can find here.

"Inspired by the words of Virginia Woolf, Ms Lemay welcomes you into her home, her art and her life as a poet and photographer of the every day."  ~ from the back cover 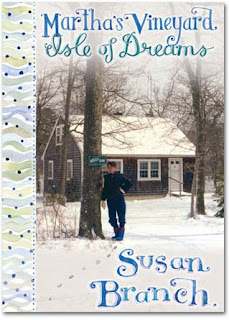 I just finished reading this lovely memoir ... for the third time now. The first time, I really tried not to hurry through it too much but I have to tell you it's a page turner. If I did finish too quickly, I could do a happy dance, turn around, and read it all again. Which I did.

Knowing how the book ends, I was able to relax and just savour each page—enjoying Susan's lovely artwork in detail, pondering the cute and pithy sayings she included for our mirth and pleasure, letting the story wash over me with its poignant moments as well as its delightful laugh out loud ones. All the while nodding in total recognition of a kindred spirit—for even though our life stories are worlds apart, there is so much that resonates and is the same.

As a young woman Susan knew she wanted to change the world—well, she certainly has made the world a better place with her cheerful, resolute, and generous spirit as well as her endearing books. She has delighted the lives of many 'girlfriends', including this particular one! 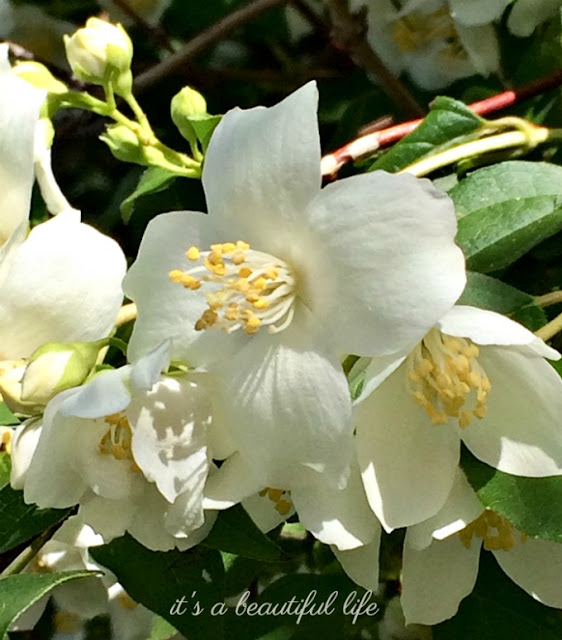 I couldn't close this post without showing you a couple of pictures of our mock orange. It has given us such joy again this summer. As Susan Branch so aptly said once, "I could never in a hundred summers get tired of this." A huge shrub now, it towers over our back deck. Each year it comes thick with delicate blossoms, filling the air with its sweet perfume—making it a perfect spot to read.

Fragrance, beauty, and a good book. What more could a person ask for? I heard that, someone out there chimed that an iced glass of something cool and a nibble of something fruity and sweet could be it! You are right, that would make it practically perfect in every way. 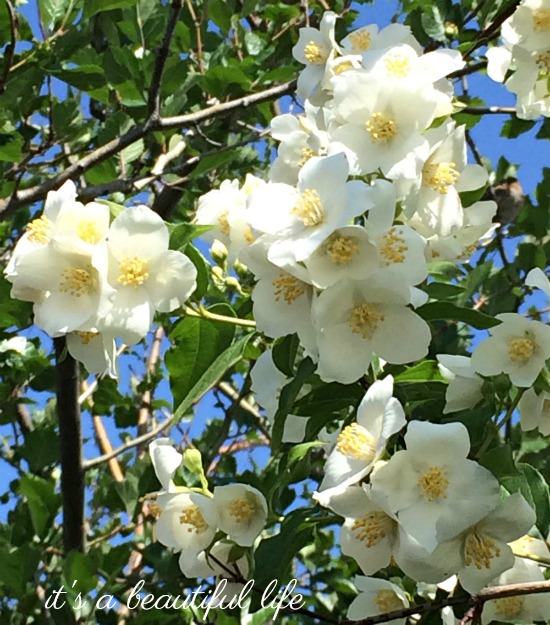 "Rest is not idleness, and to lie sometimes on the grass on a summer day
listening to the murmur of water, or watching the clouds float across the sky,
is hardly a waste of time."
~ John Lubbock

And, so I come to the end. I hope you will have lots of those deep summer moments to idle away with a good book in a shady spot. I'd love to hear what you are reading this summer. Here's wishing you a wonderful week ahead.