A Visit to Blackwell's Bookshop in Oxford, Part 3 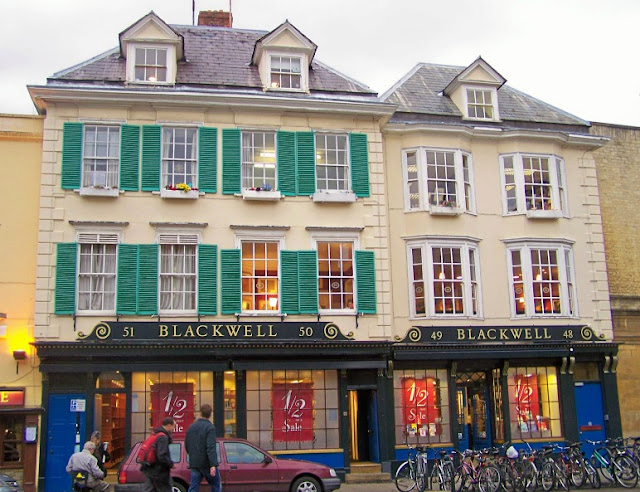 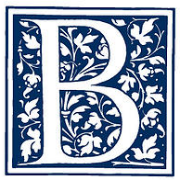 When I think about our visit to Blackwell's Bookshop in Oxford, an old song from the 1968 musical Oliver! comes to mind. But instead of 'food, glorious food', I hum 'books, glorious books'. For, Blackwell's is not just any book store, it's a book lover's paradise. Carrie, our beautiful B&B hostess, calls it the most dangerous bookstore in the world. I think she's right. A person could easily disappear down the rabbit hole and be lost forever among the book shelves ... unless, of course, a discerning husband has a firm grip on a coat sleeve to ensure her safe return.

The shop doesn't appear large from the outside, but step up into one of the two entrances and you'll discover what someone describes as 'an Aladdin's Cave filled to the brim with books on every subject'. The flagship shop, founded in 1879 in Oxford, was originally twelve feet square; now it includes several floors, including the massive underground Norrington Room. Take a virtual tour of the shop and you will have a good idea of what to expect. I spent most of my time on the first floor. Note: if you live on this side of the pond, you might need to upload the UK adobe flash.

A whole day week should be spent in that wonderful shop (there's a lovely cafe if you need refuelling), for there are many nooks and crannies on several floors to while away an hour here, two or three hours there. The too-short time we spent there was pure pleasure, with staff at the ready to show us around. We soaked up the ambience and drank in the smell of books. We paused to read interesting quotes scrolled across walls, and peered at strategically placed photographs of well-known personages who once shopped there -- reminding us that fellow book lovers are always in fine company.

We marvelled to think of the treasury of knowledge housed in this rambling space and gasped to learn a whole room was dedicated to the works of well-loved poets and others more obscure. Just as Westminster Cathedral has its famous Poet's Corner, so does Blackwell's: 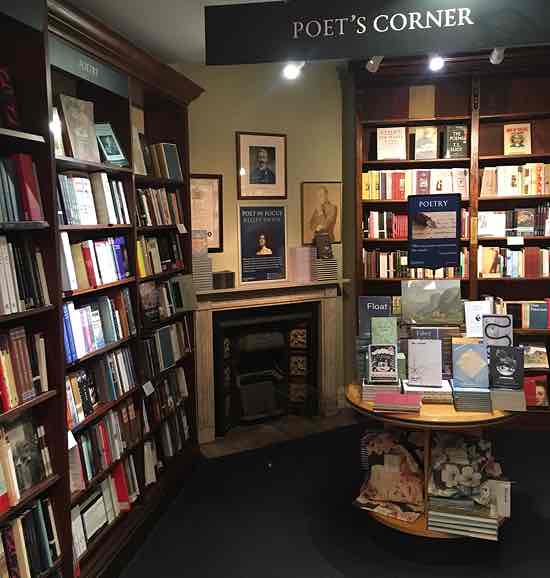 Now that you know a little about the shop, you're probably wondering what I bought while I was there. Clutching a growing stack of books, three bagfuls later, my suitcase back at the B&B suddenly weighed a dangerous amount. This shop truly is a book lover's haven; I would have to get a job if I lived in this city.

On that somewhat bewildering first day we arrived in Oxford, Rick and I walked through the streets to orientate ourselves. That's when I first caught sight of a book perched in a shop window that I just knew I had to have. Into the shop we went and headed straight to the display of Oxford Sketchbook. Paging through a sample copy, I knew my first instinct was correct -- I was smitten. Two copies purchased then and there, one for myself and one for a birthday gift. Our first shopping experience in Oxford and it was in Blackwell's; we'd go back for a proper visit a few days later. Since coming home, I ordered two copies more through amazon.ca. 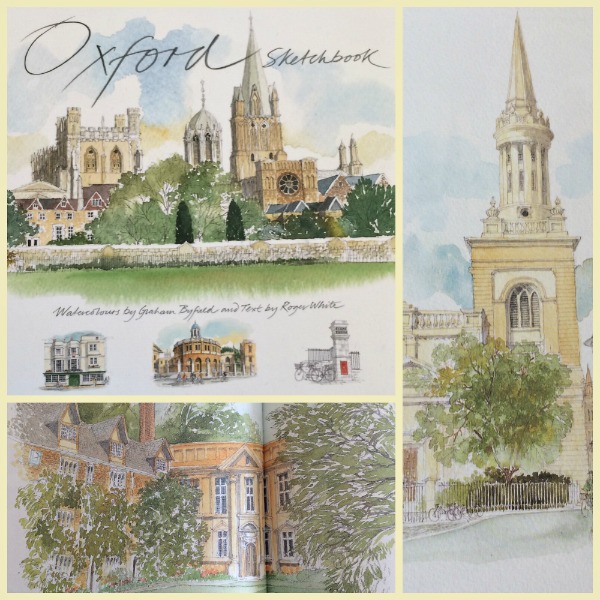 "Oxford, with its golden skyline of towers, spires, domes and turrets set against lush water meadows and hills, was considered by the poet Keats the finest city in the world. Artist Graham Byfield strolls with his sketchpad through college gateways, quadrangles and gardens, along broad streets and narrow alleyways, into great ceremonial buildings and medieval pubs full of character. On the way, with a few pencil strokes and splashes of watercolour, he captures passing scenes of student and civic life enacted before one of the finest architectural backdrops in the world. ...

Accompanying the paintings and sketches are observations and notes handwritten by the artist, as well as a learned and lively introduction to Oxford, its history and buildings by the noted architectural historian Roger White." 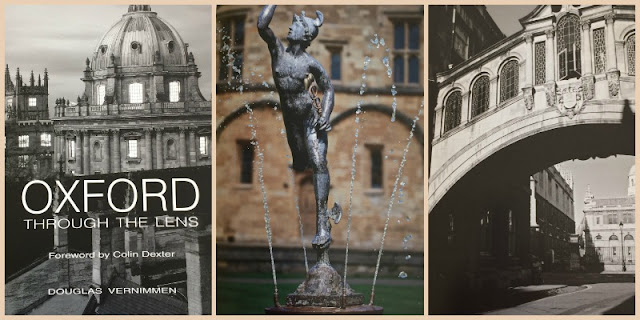 OXFORD Through the Lens
Douglas Vernimmen
Foreword by Colin Dexter

Oxford Through the Lens is a wonderful collection of Oxford's architectural, historical, and cultural impressions through photography. According to the inside cover, the book also reflects Douglas Vernimmen's feelings about the city. He worked as a scientist at Oxford in the 2000's which allowed him to view the University 'from the inside'. An award-winning photographer, Vernimmen says, "My wish would be to go back in time with my camera: people would undoubtedly look different, but the buildings would probably look much as they do today."

What makes this coffee table book extra special for me is that smack dab in the middle is a two-page spread featuring Holywell Bed and Breakfast. Which simple meant we had to ask Jack to autograph it, as you will see when you peer more closely at the photo. 🐾 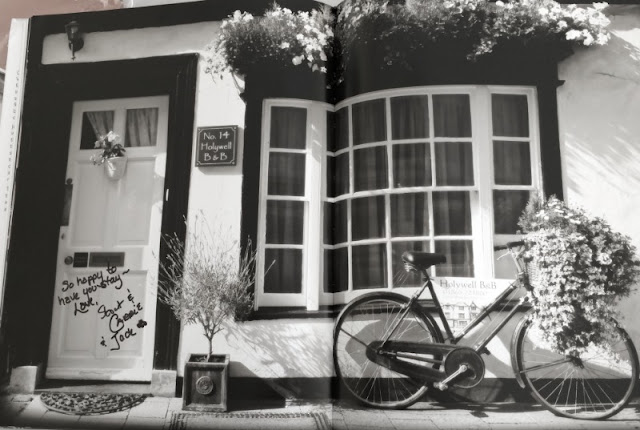 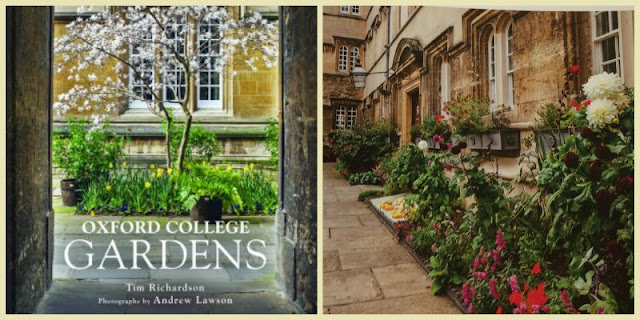 "The gardens of Oxford's colleges are surprisingly varied in style, age and size, ranging from the 16th-century Mount in the middle of New College to the impressive modernist design which is St Catherine's. ... Founded in 1621, the Oxford University Botanic Garden is the oldest in Britain, and holds one of the most diverse plant collections in the world. ... In this book Tim Richardson's elegant, authoritative analysis combines with Andrew Lawson's glorious photographs to reveal the diversity and discreet charm of Oxford's college gardens."

Yes, this book is laden with charm and beauty -- every page filled with stunning photos of Oxford's college gardens. We had the opportunity to enjoy some of these gardens in person, including the Botanic Garden. Because the colleges were between terms while we were there, visitors could gain entrance, and walk at leisure through the grounds and some of the college buildings. The wisteria was just coming into blossom at Magdalen College, and there were plantings of tulips and other spring perennials everywhere.

The book really is 'sightseeing in an armchair' -- I'd say almost as good as being there, well, not quite, but you know... if you can't get there in person, the book is a lovely substitute. A beautiful memento of our beautiful holiday. 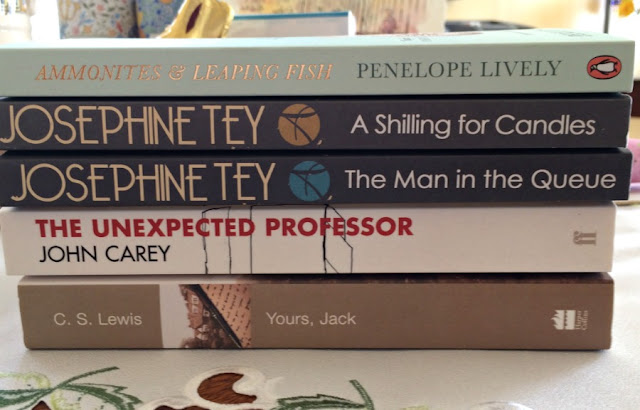 As for something lighter in subject matter and weight, here are other books I bought:

Ammonites & Leaping Fish by Penelope Lively. As I stood in front of the shop's biographical memoir section, one of my go-to spots these days, this title intrigued me. An ammonite fossil and a 12th century sherd of a leaping fish are two of the six treasured possessions which Ms Lively uses as prompts to write her fragments of memories. At eighty, she looks over her life and 'reports back what she finds ... what it is like to be old as well as on how memory shapes us'.

Two Josephine Tey detective mysteries: The Man in the Queue and A Shilling for Candles. Shortly before we went to Oxford, I found a new to me mid-twentieth century British mystery writer at the library. I so enjoyed reading The Singing Sands (you can read about it here) I went in search for more. When I saw the nice selection of her books at Blackwell's, I hemmed and hawed about whether to get the complete set of six in the series, and to heck with the luggage weight fees at the airport, or just choose a couple. You can see, I opted for the couple. Perhaps I was remembering those heavy coffee table books already packed in my suitcase.
The Unexpected Professor: An Oxford Life in Books by John Carey. The author has been a part of Oxford University since the 1950's, now an Emeritus Professor. He shares his stories about the books that 'formed the backbone of his life'. I am always interested to see how other people write memoir, and I'm especially eager to see how Prof. Carey uses books as a central theme. I look forward to getting into it soon.


Yours, Jack: The Inspirational Letters of C.S. Lewis. Who can come to Oxford and not buy something by one of its great writers. It was because of C.S. Lewis and his influence on my life through his writings that I longed for years to visit. Although I have read and already own many of his books, I just knew there had to be something of his that would make a lovely memento of my Oxford visit.

Brought the book home to our room and began reading it that evening. I soon realized I'd made the right choice for more than one reason: the snoopy person in me enjoys reading over the shoulders of others to see how they live their lives. I enjoy his candour, humour, and wisdom from the two other letter collections I have of his; I was sure I'd love this one too.

Another reason, which I'm finding completely satisfying, is that in his letters Lewis often references various spots while he lived in Oxford, and for the first time ever, I am reading something that feels familiar, I recognize it. I can say, Oh, I was there, I saw that. Now I have a clearer picture in my mind to what he is referring. It makes this reader feel closer to the author.

*The other two collections I have are: Letters to an American Lady, 1971, and Prayer: Letters to Malcolm, 1964.

Well, there it is... a glimpse into my visit to Blackwell's. Hope it was worth the long wait. One last thing to share is a quote, not from anything I bought that day, but from one of my all-time favourite English books, Brideshead Revisited, by Evelyn Waugh:

"Oxford—now submerged and obliterated, irrecoverable as Lyonnesse, so quickly have the waters come flooding in—Oxford, in those days, was still a city of aquatint. In her spacious and quiet streets men walked and spoke as they had done in Newman's day; her autumnal mists, her grey springtime, and the rare glory of her summer days—such as that day—when the chestnut was in flower and the bells rang out high and clear over her gables and cupolas, exhaled the soft airs of centuries of youth. It was this cloistral hush which gave our laughter its resonance, and carried it still, joyously, over the intervening clamour." Evelyn Waugh, Brideshead Revisited, describing Oxford of 1923

Wishing you glimpses of heaven in unexpected places
on this beautiful weekend,