For The Joy Set Before Him 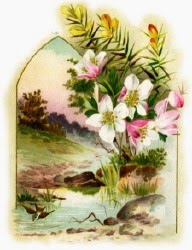 What gives an Olympic athlete the motivation and stamina to endure countless months of hard training, working out till his muscles scream in agony? What makes him choose to work on his technique or program, even when he hears the laughter of friends floating through open windows on warm summer days? What makes the athlete endure? What gives him the motivation to keep at it?

It's the dream he sees in front of him -- the joy set before him. Perhaps it's the dream to compete with the world's best, to win a coveted gold medal, to beat his own personal best record, or to receive accolades from fans around the world. Whatever his dream, that's what makes him endure his 'cross' of hardship.

Jesus Christ also had a dream. It was this dream, this 'joy set before him' that gave him the courage and the willingness to endure great hardship and suffering.

"...He, for the joy (of obtaining the prize) that was set before Him, endured the cross..." Hebrews 12:2 (amp.)So what was this great joy? What was worth so much that He considered it a prize, a prize so grand, so wonderful that He thought it well worth enduring the shame and degradation of all that led up to the cross? What was the prize that gave him so much joy just thinking about it?

Was it because He was finally going back to heaven, after his stint here on this planet with all these crazy people? Was it because He was going to get to sit at the right hand of the Father when He returned? Was it for the inheritance and the title of "King of Kings"?

No! No! The realization that the great joy, the great reward He kept seeing and thinking about during this time was.... me .... and you... and every other person ever to be born!

We were the picture He had in his mind's eye when He let cruel men beat his body, rip out his beard, and pound nails into his flesh. He endured all that in anticipation of the joy of knowing that his sacrifice would clear the way for you and me to become friends with God again, for all time and eternity.

We are his reward. We are the ones that gave -- and continue to give -- Jesus Christ joy unspeakable. Don't ever think that you aren't much to God. You are what He saw and dreamed about. You are the prize! You are the one for whom He endured the cross... for the joy set before him... It was YOU! YOU! YOU!