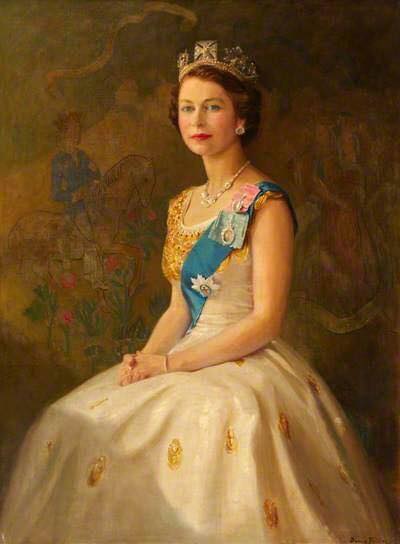 In Memoriam
Queen Elizabeth II
1926 - 2022
Some of my earliest memories of Her Majesty Queen Elizabeth II are probably from seeing the postage stamps, which bore her image, my mother used to mail her letters. And certainly from the lovely portrait I saw of her in public places—in our school, at the post office, in our community hall. It might have been the portrait above, it feels so familiar, which is why I chose it for this commemorative post. (artist unknown, image found on the internet)
As a girl, I remember waiting with my family every Christmas Day to watch the Queen's Address. The regal event was all part and parcel of the day's beribboned festivities. And when the Queen came to Canada on numerous occasions, I eagerly waited to catch the clips of her on television and in the newspaper. My mom as a girl made a scrapbook of Royal visits. She remembers waiting with her mom and dad to see young Princess Elizabeth step off the train in Edmonton with her parents, the then King and Queen. Mom's scrapbook, lost in the attic of her childhood home, came to light years later to the great delight of us all. It thrilled me to carefully page through this tactile remnant of my mom's girlhood. I think it captured my own imagination for the Royal Family. I was always glad Canada was a part of the Commonwealth Family.
The closest I came to seeing Queen Elizabeth in person was when she visited Edmonton, Alberta in August 1978 for the opening of the Commonwealth Games. I was twenty-one, had moved to the city earlier in the year, had started my first adult job. My first summer in the city. The news came down in our office that the Queen would be at the Alberta Legislature one morning, and anyone who wanted to join the lines could head down the hill to see her. The Queen no doubt came that day to meet her viceregal, the Lieutenant Governor, Alberta's representative of the Canadian monarch and to meet the Premier of Alberta, Peter Lougheed. It must have been a quieter day for the Queen, I don't remember hoards of people around that sunny morning. I easily found a spot near the north entrance of the stately domed building where she came out, stepped into the waiting car (probably a Bentley) with the royal flags fluttering on the hood. Her entourage slowly drove by, so close I could almost touch the car. I don't recall if she waved. I know I did; I might have had a little flag in my hand. It was a thrilling moment. Not having a television or a camera (certainly no iPhone), I bought up all the newspapers to clip photos for my own Royal scrapbook.
—— ❦ ——
This week I've been gently following the news of the Queen's coffin on its journey from Balmoral to Edinburgh to London, where she now lies in state at the Palace of Westminster until her funeral on Monday, September 19th. If you've been watching, you may have noticed the lovely wreath of white flowers set on top, designed using some of the Queen's favourite flowers picked from the Balmoral Estate. It included dahlias, sweet peas, phlox, white heather, and pine fir. info from Country Living magazine
The other afternoon, Rick and I visited the nearby St Albert Botanic Park where we hoped to see their beautiful fall display of dahlias. There was a definite autumnal feel to the day, warm sunshine mingling with crisp air and the sound of leaves scrunching as we walked. Since dahlias were a favourite of the Queen's, I wanted to pause right there amongst the dahlias. . . to honour the memory of this gracious lady I have known all my life and have loved as our Monarch.
Here are dahlia photos from our visit, including one pearly white blossom which I took especially with Her late Majesty in mind. 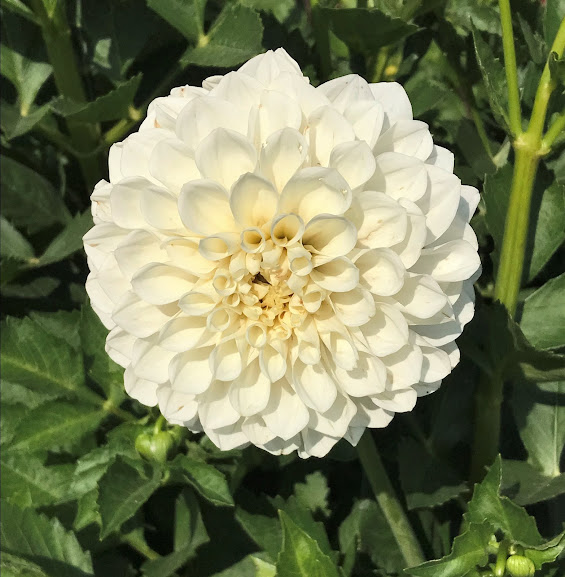 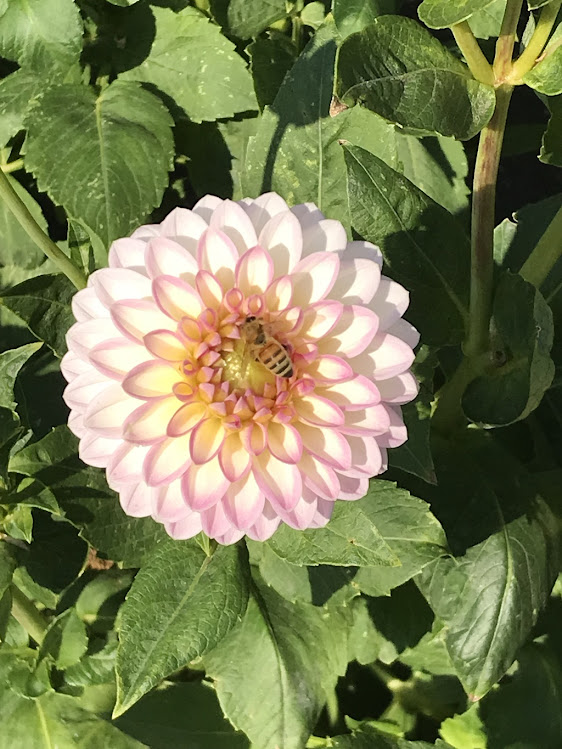 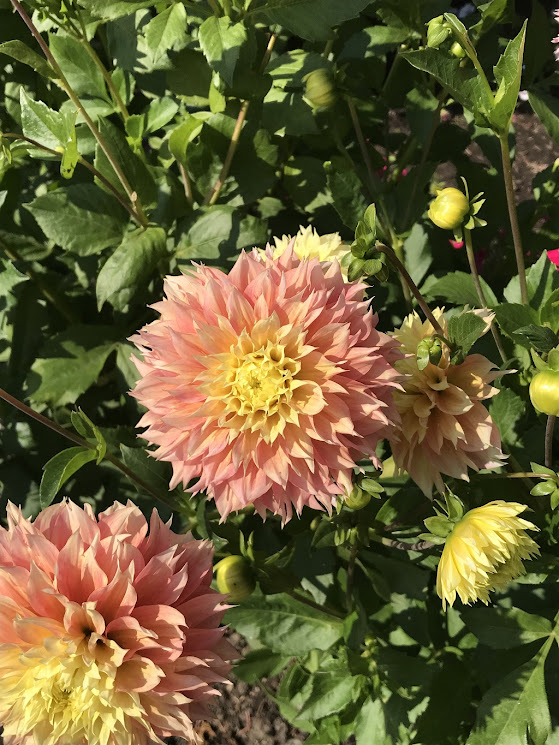 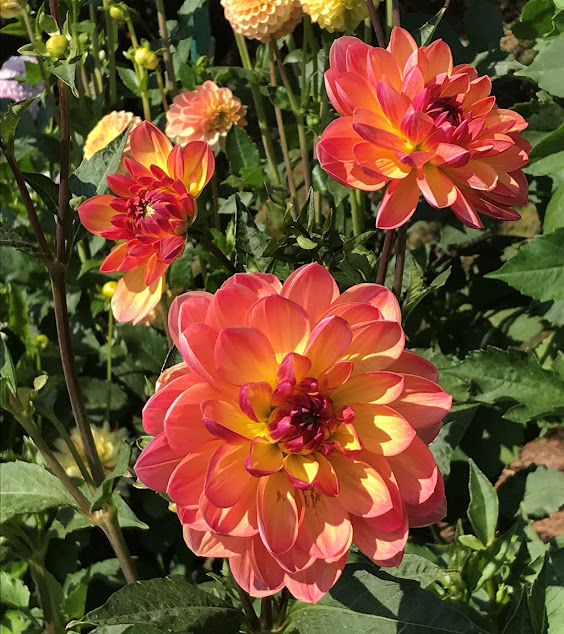 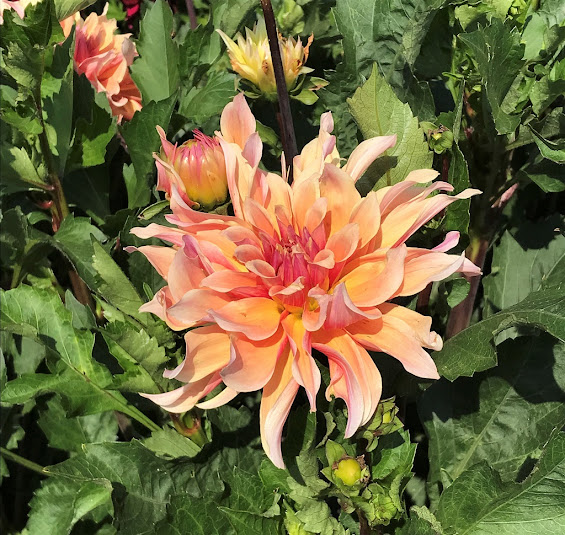 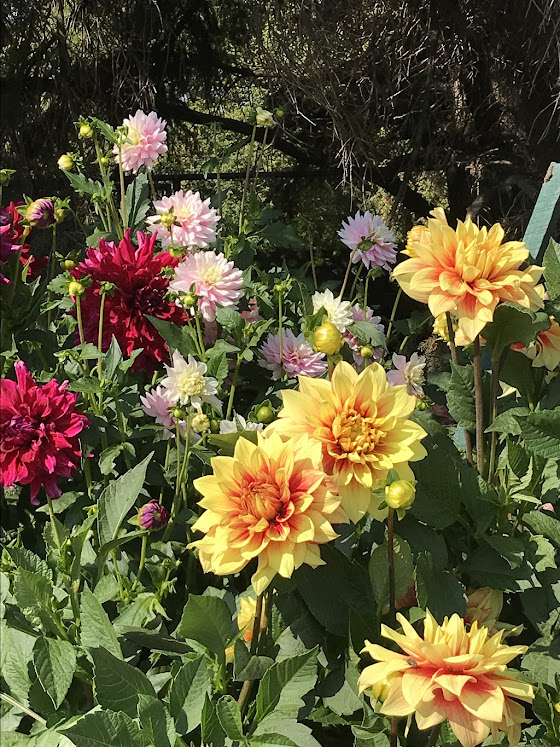 "May flights of angels sing thee to thy rest."
From King Charles's Address following his mother's death
—the line originates from Shakespeare's Hamlet
—— ❦ ——
Wishing you a beautiful day,
Brenda
♥ By Brenda @ Its A Beautiful Life at September 16, 2022