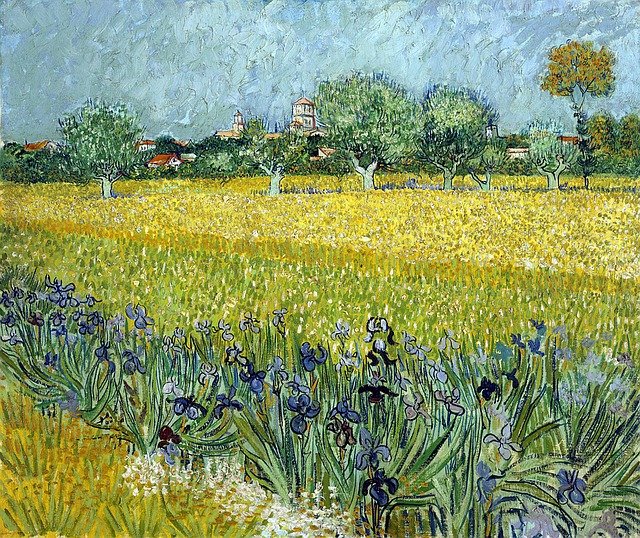 "Field with irises near Arles"
Vincent van Gogh
As we all know, the pandemic has turned the world upside down, impacting society, impacting us as families and individuals. With these and other strange and ofttimes disturbing events going on around us, it is so easy to focus on these circumstances. I came across a little story Austin Kleon mentions in his book Keep Going that shifted something for me. It was from a passage in Leonard Woolf's memoir Downhill All the Way in which he described a scene that took place just months before the start of World War II. Just so you know, Leonard was husband to Virginia Woolf, well known author of books like A Room of One's Own. He edited literary journals and wrote books on history. Together they ran a printing press.
For me, Leonard's words had such a restorative element—I could feel my chin lift and my shoulders straighten. Having just commemorated Remembrance Day, it feels appropriate to share today:

"I will end . . . with a little scene that took place in the last months of peace. They were the most terrible months of my life, for, helplessly and hopelessly, one watched the inevitable approach of war. One of the most horrible things at that time was to listen on the wireless to the speeches of Hitler—the savage and insane ravings of a vindictive underdog who suddenly saw himself to be all-powerful. We were in Rodmell during the late summer of 1939, and I used to listen to those ranting, raving speeches. One afternoon I was planting in the orchard under an apple-tree iris reticulata, those lovely violet flowers. . . . Suddenly I heard Virginia's voice calling to me from the sitting room window: "Hitler is making a speech." I shouted back, "I shan't come. I'm planting iris and they will be flowering long after he is dead." Last March, twenty-one years after Hitler committed suicide in the bunker, a few of those violet flowers still flowered under the apple-tree in the orchard." —Leonard Woolf

Woolf's defiant comment about his irises reminds me of what Martin Luther is quoted as saying: "Even if I knew that tomorrow the world would go to pieces, I would still plant my apple tree."
And, as Austin Kleon points out in his book after he read the passage above: "I don't know for sure what kinds of flowers I'm planting with my days on this planet, but I intend to find out, and so should you. // Every day is a potential seed that we can grow into something beautiful. There's no time for despair."
* * *
On this grey and blustery Friday,
here's wishing you a lighter load for your weekend.
With love and heart hugs,
Brenda
(Top)Imagine found on Pixabay
♥ By Brenda @ Its A Beautiful Life at November 12, 2021