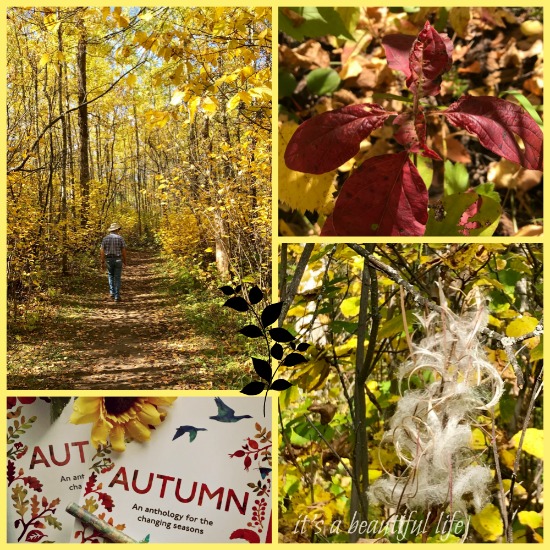 "Autumn is
an adventure, a season of transformation, and a time
to prepare for the long winter ahead. It is a
thousand leaves falling and nourishing the soil beneath,
it is heavy rainfalls that catch you off guard and drive you to shelter;
it is the refreshing winds that sweep the haze of summer away...
It is the changing of landscape, the subtle anticipation of winter.
Autumn is to be enjoyed."
LOUISE BAKER, AUTUMN: AN ANTHOLOGY FOR THE CHANGING SEASONS


It hardly seems possible that we're finished with Summer and September. Being away in Hawaii for a few days last month really messed with my autumnal sensors this year. I could never quite get a proper feeling of the season shifting. It was still very much like summer when we left but a week later when we got back, trees had turned and dried leaves were scampering down roadways, heaping in corners and under shrubs. And then last weekend, it got really cold and in parts of the province, people were digging themselves out from under snow. Although we missed the snow (thankfully), we felt the drop in temperature. Summer was now definitely over, even my skewed season sensors picked that one up.

But then, after that initial blast of pre-winter things settled down, and we've been enjoying some proper autumn days. Those crisp and sunny days with rainy patches and wind tearing leaves from bending trees. Flock after flock of migrating birds on the fly. Combines creating dust storms as grain fields are harvested. The neighbourhood was filled with robins the other morning. It sounded so much like Spring, but with my autumn sensors now in working order I didn't pretend -- I reminded myself that, no, the birds were heading south now.

Still, September was a good month. No, no, it was a most excellent month ... let me give you a little recap. 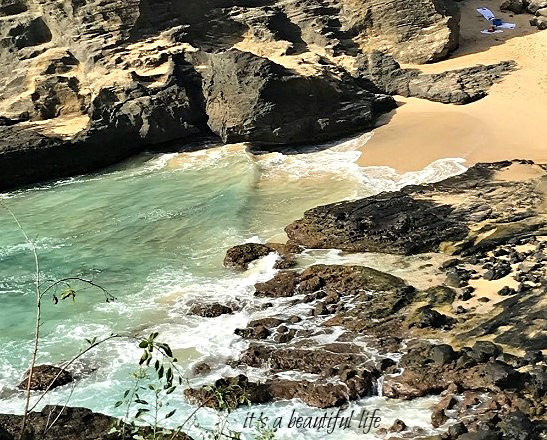 Of course, you already know that we spent a lovely week in beautiful Hawaii with our dear friends. If you didn't catch it earlier, here's the link to the previous post for details and photos. 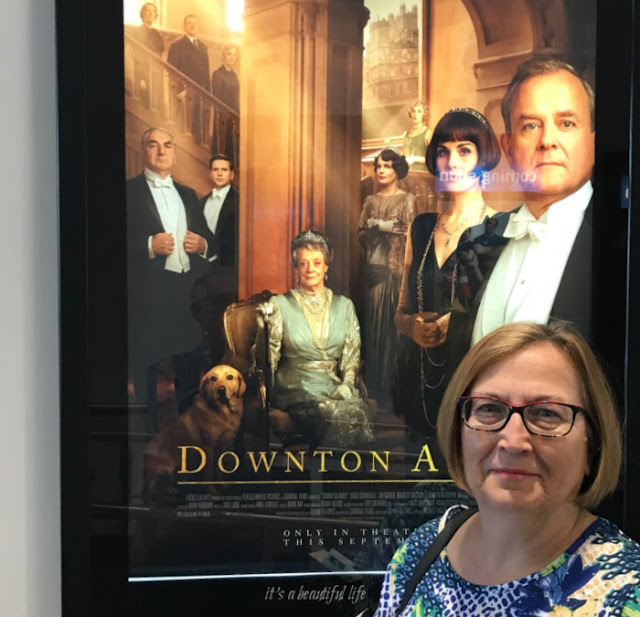 Then came the long-anticipated Downton Abbey movie. I know friends who got all dolled up and made it a very Downton-y event with high tea and everything (what a splendid way to celebrate). Hubby and I didn't take it to that level, but we did go out for supper first which was lovely.

Did you see the movie? Wasn't it wonderful? We love, loved it. If you were fans of the series, I can't imagine you not loving the movie. If you haven't seen it yet, I hope you get to. So many wonderful  scenes. And Lady Violet was her witty self through it all, although I think Moseley stole the show during the Royal Supper scene. When discussing the movie with my sis-in-law the next day, we were howling at how that moment unfolded. Poor Moseley, we felt his anguish and we weren't laughing 'at' him, but it was just too comical to keep from chuckling. Of course I can't say more as not to let out spoilers. So if you haven't gone, go go go. And if you need to know what happened, I can private message you. 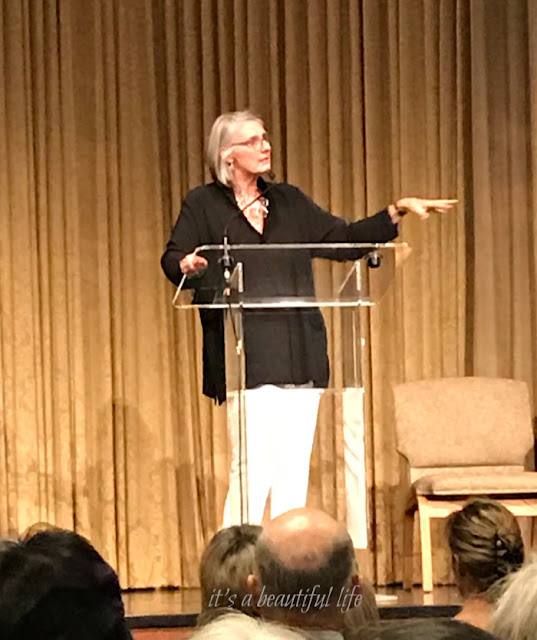 Several days later after that, we spent a delightful afternoon at the book event with our very own Canadian best-selling author Louise Penny when she came out west to Alberta. The sold-out event was hosted by one of Edmonton's awesome independent stores, Audrey's Books. I ordered tickets as soon as I knew she was coming. On the day, we made sure we got there in plenty of time; though we had tickets, it was general seating. We got wonderful seats near the front. Louise came out on stage to a standing ovation. We sat enrapt as she shared stories about her writing and how she got started. It was over all too soon.

Louise is an amazing speaker ... articulate, very funny, and so, so humble. She said she never ceases to marvel at all the amazing people who come to see her and buy her books. And never takes it for granted. She remembers how it was in the beginning, at the publication of her first novel, Still Life. She humorously relayed how she used to dream about her books being published while soaking in the tub. When her first book came out, she didn't hear from her publisher so she called him and mentioned she was ready for the book tour. He replied, you're not scheduled for a book tour, nobody knows who you are at this stage, nobody cares. What? Acutely disappointed, she says one day to her husband, we should take all the advance money and (deliberate pause). We assumed she was going to say and put it into doing our own book tour then. What she actually said, we should take all the advance money and use it to go out for a very nice lunch at ... (pause) ... MacDonalds. Well, she had us eating out of her hand after that.

It's hard to remember it all. I did find an interview written some years ago when her third novel came out (she's working on her sixteenth) that shares some of the stories she told us that day. If you are interested, here's the LINK.

Ah yes, thanks to my sister, I do have an autographed copy of Louise's newest book A Better Man. Louise didn't do personal book signings that day, they were all pre-autographed. My sister bought one of those (I had ordered my copy online months earlier and I brought it along). She suggested we trade copies and so now I'm now the possessor of the autographed one. Louise was in Edmonton that weekend for a family wedding, so we were grateful she shared those few hours with us, and we hardly begrudge (wink) that she had to fly off afterwards. It would have taken her hours to meet up with several hundred other fans. Anyways, she's a beautiful lady and I can see why her books are so full of kindness and goodness even in the midst of hard, terrible events like murders happening in Three Pines. I'm so glad I got to see her in person. 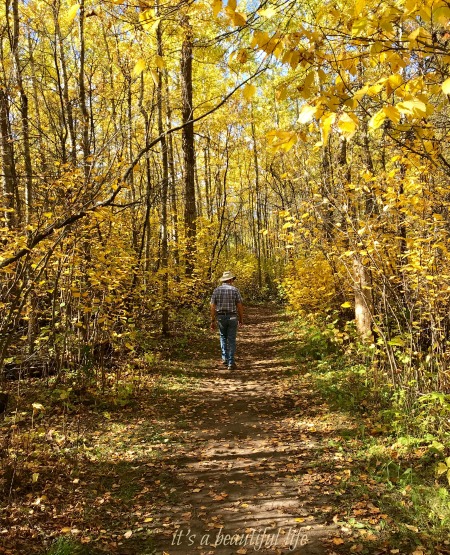 We went for a walk in one of our natural areas a couple of Sunday afternoons ago. Made sandwiches and a thermos of tea. It was pleasant and warm that day. Sunny, but still with autumnal crispness. The woods was quiet that day. Hardly a breeze. Sometimes we'd hear the grass rustle, but we never spotted any little critters. The birds were still too. Families were out with kids and dogs on leashes. One woman with youngsters in tow, heading back, asked if we were anywhere near the entrance. We could confirm to her relief, that, yes, it wasn't too far away. Maybe her feet were hurting, or her kids were ready for their video games and snacks. The dogs were all happy to be out. 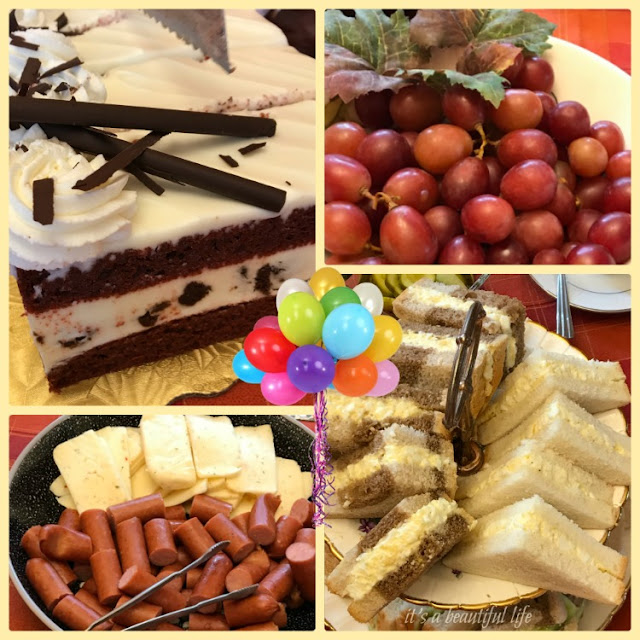 The tail end of the month saw us celebrating family birthdays, where I brought the tea sandwiches (egg salad with lemon zest; rosemary ham, cheese, and fancy mustard; cucumber on white), with Sister bringing the most delicious red velvet cake. It was one of those days where we didn't fuss too much yet it was a lovely afternoon in the fine company of loved ones. The egg sammies went down nicely. So did the cake. 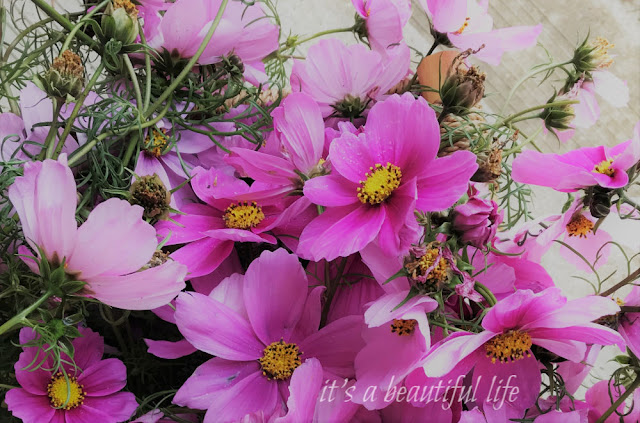 Bringing in the last bouquets of cosmos

And through it all, the garden continued to give us just a few more photo ops before the frost hit. Now, every morning that we wake up without heavy frost on the said pumpkins is a bonus day. I've gone through the garden and said my thank you's and my goodbyes. It's a little sad. They say it's coming this week. So we're ready. I think.

Below is one last hurrah of the front garden. 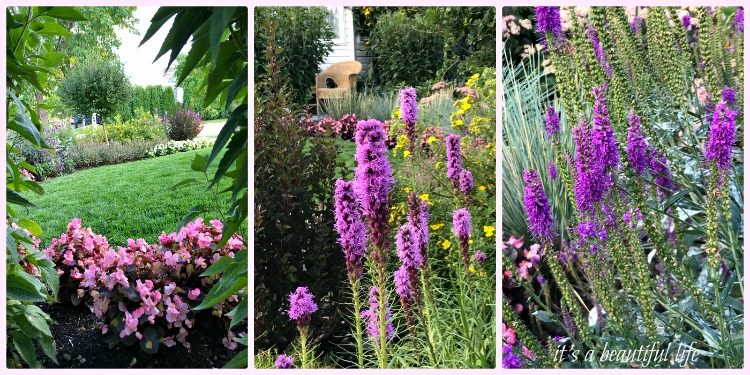 
I hope you've enjoyed your visit.
On that note, I'm wishing you a beautiful day.

PS. I forgot to mention earlier, I did an little review of
Sarah Clarkson's delightful and beautifully written 'Book Girl'.
Here's the link if you are interested.