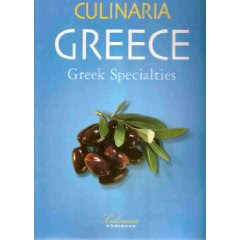 A friend lent us her copy of Culinaria Greece, a wonderful book about Greek cuisine and culture. It's been quite the culinary voyage as we sigh and, oops, drool over richly coloured photos and tempting recipes.

One recipe that captured my appetite is a potato dish. Along with the recipe, here's an interesting -- and amusing -- bit of historical information about the introduction of potatoes to the area.

The editor, Marianthi Milona, says that potatoes are now "an essential part of Greek cuisine and are just as popular an appetizer as they are a main dish, whether fried, baked, or boiled.

However, when this 'new-fangled' food was first introduced about 150 years ago, it caused such controversy that...the first government chef of the young Greek state allegedly had to resort to a cunning ploy to get his extremely suspicious countrymen to accept this unknown food. Thus, instead of handing potatoes out freely, as he had intended, he ordered his soldiers to appear to guard them. This immediately aroused the curiosity of the farmers, who promptly stole them!"

So guess what? We're having Patates Lemonates, or otherwise known as Lemon Potatoes, for dinner tonight. They are a version of oven-baked fries and scalloped -- two pounds of potatoes cut into fingers, seasoned with salt and oregano, sprinkled with Greek extra virgin olive oil and the juice of two lemons, plus enough water to just cover them -- all baked in an oven-proof dish at 400 F until all golden brown, at which point you turn off the oven and leave in for a few extra minutes.

On this sort of spring, sort of wintry day in Alberta, here's to thoughts of warm summer evenings, the sounds of gentle lapping waves, and the seductive aromas of Greek cooking.

Not up on your Greek?
Translated, it apparently means "Where is the beach?"